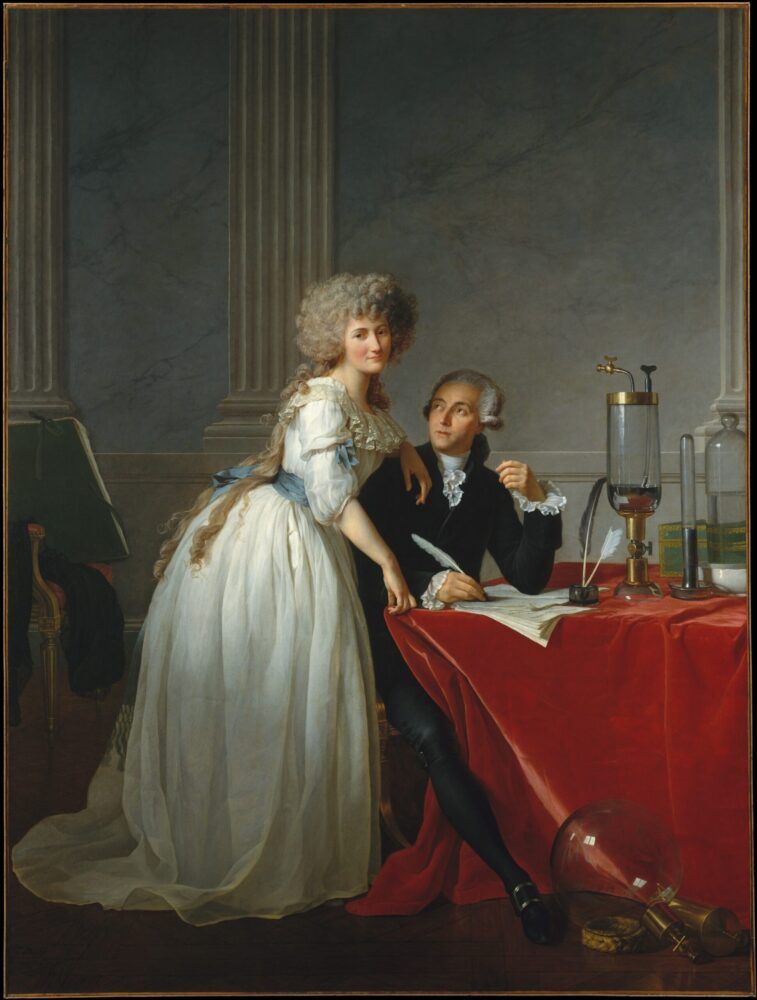 Those of us who have studied chemistry are no doubt familiar with the name Antoine-Laurent Lavoisier, also known as the ‘Father of Modern Chemistry’; however, many don’t realize the significant role played by his wife, research partner, and chief collaborator, Marie-Anne Pierrette Paulze Lavoisier, who should certainly be known as the ‘Mother of Modern Chemistry’ for her contributions to its advancement.

A century before Marie Curie made a place for women in theoretical science, Marie-Anne surrounded herself with laboratory work and was an editor, translator, and illustrator of scientific texts. As her husband’s assistant and colleague, she became one of chemistry’s first female researchers. Unfortunately, we don’t know the full nature of the Lavoisiers’ collaboration. The values of the 18th century made it difficult for a woman to receive proper credit for working with her husband, let alone a scientific superstar.

The beautiful intellectually curious daughter of scholar and nobleman, Jacques Paulze, Marie-Anne left school in 1771 after her mother’s death to become her father’s hostess. To avoid an arranged marriage at age 14 to a fortune hunter 36 years her senior, she agreed to wed 28-year-old Antoine, a frequent guest at the Paulze home. A respected geologist and chemist who also held a law degree, Antoine was a member of the French Academy of Science. Independently wealthy, he was able to pursue his love of theoretical chemistry and initiate a chemical revolution based on logic and mathematical principles.

Antione educated Marie-Anne in the use of balances, burning lenses, and reduction vessels and taught her German and Latin, the language of the scientific community.  To help Antoine in his investigation of the physical nature of fire and heat, she taught herself English and introduced him to American and British articles she translated into French. Marie-Anne took art lessons from French painter, Jacques-Louis David, and began illustrating Antoine’s scientific papers, monographs, and articles. She created fine detailed drawings for many of Antoine’s important experiments so other researchers could emulate them. Her drawing of an experiment on respiration shows Antoine directing the work while she records data at a table off to the side. She receives no credit, but the figures in his books carry her signature.

As a team, the Lavoisiers established modern chemistry by separating its scientific aspects from alchemy and by evolving an updated scientific glossary. They coined the term “oxygen,” identified it as an elemental gas, described the oxidation process which changes iron to rust, and analyzed the products of normal human respiration as water and carbon dioxide. Antoine also named hydrogen and carbon, and opposed the phlogiston theory. (In the case of phlogiston, it was Marie-Anne’s translation which convinced Antoine the theory was incorrect, ultimately leading to his studies on combustion.)

In the spring of 1774, the couple experimented on the calcination of tin and lead in sealed containers and confirmed the increase in weight of calcinated metals derived from combination with air.  After conferring with English physicist Joseph Priestley, who visited their home in October 1774 and discussed his own laboratory findings, the Lavoisiers re-examined residue from burning. The results of their meticulous project disproved earlier theories of combustion, and Antoine is most noted for discovering the role oxygen plays in this chemical reaction.

Antoine formulated the law of conservation of matter, which established there is no gain or loss of weight in the elements of a chemical reaction, a theory binding chemistry to physical and mathematical laws; however, the Lavoisiers received no credit for the advance to chemistry. In 1777, Antoine lobbied Gustaf III, the king of Sweden, for the Nobel Prize in theoretical chemistry, but he lost out to Priestley and Carl Wilhelm Scheele, both of whom claimed to have discovered oxygen before the Lavoisiers’ experiments.

For her husband’s classic 1789 summation, Traité Élémentaire de Chimie [Elementary Treatise of Chemistry][1], the first modern chemistry textbook—a pivotal work which presented a unified view of chemistry and a new and improved system of scientific nomenclature—Marie-Anne provided original sketches, watercolors, and 13 precise copperplate illustrations showing the laboratory instrumentation and equipment used by the Lavoisiers in their experiments. The Lavoisier chemistry textbook established a new definition of ‘element’ as well as a summation of the 23 elements science had identified up to then. For each experiment, Marie-Anne engraved schematic drawings of equipment and outcomes and labeled parts alphabetically to explain the function of each mechanical element. She also kept strict records of the procedures, lending validity to the findings Antoine published.

In 1792, during the Reign of Terror following the French Revolution, the Lavoisiers were forced out of their home and lab. The following year, revolutionaries halted the work of scientific academies. Presented with an arrest warrant on November 24, 1793, Antoine was apprehended by extremists who tried and convicted him at a Jacobin tribunal based on trumped up charges made by Jean-Paul Marat, who bore a grudge against Antoine for rejecting him for membership in the Academy of Sciences. Marie-Anne was orphaned and widowed on May 8, 1794, when her father and husband were guillotined for treason. She fled France and served 65 days in the Bastille, the infamous Paris prison.

Within the year, the Republic restored Marie Anne’s estate and returned the confiscated scientific library with this note, “To the widow of Lavoisier, who was falsely convicted.” She worked to protect and extend Antoine’s reputation as a chemist and prepared a two-volume set of Antoine’s work, Mémoires de Chimie [Memoirs of Chemistry]. The preface, which included a condemnation of six men she felt could have come to her husband’s aid during his imprisonment, was so scathing no publisher would print the book; however, in 1803 she printed it privately and distributed copies.  Two years later, she removed the preface, republished the book, and issued free copies to French scientists.

Marie-Anne gave up scientific experimentation and dedicated herself to business and philanthropic causes.  Before her death in 1836, she was able to recover nearly all of Antoine’s notebooks and chemical apparatuses, most of which survive in a collection at Cornell University, the largest of its kind outside of Europe. No diary or memoir exists to clarify Marie-Anne’s role in Antoine’s experiments or her contributions to chemistry. All remains of her personal life are a self-portrait she painted in her teens, her portrait of American scientist and statesman, Benjamin Franklin, and a famous oil painting by Jacques-Louis David housed in the Metropolitan Museum of Art showing her and Antoine at a table covered with their experiments.

[1] It was translated into English by Robert Kerr in 1790 under the title Elements of Chemistry in a New Systematic Order containing All the Modern Discoveries.

[2]This magnificent double portrait dates to 1788, when the artist was the standard-bearer of French Neoclassicism.  For many years, this painting was listed simply as Portrait of M. Lavoisier in the Metropolitan Museum of Art files, neglecting the fact, painter Jacques-Louis David placed Mme Lavoisier gloriously in the center of the canvas, staring directly at the viewer.  This placement of the wife in a posture physically above the husband is significant and somewhat atypical by late 18th century conventional standards of depicting a married couple in portraiture.